CASTLES IN THE LANDSCAPE OF SOUTHERN JORDAN 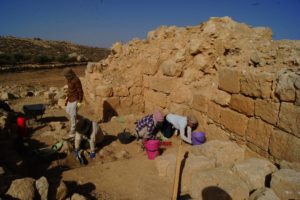 During the field prospection in the Tafilah Governorate in 2016 few interesting sites were visited. Two of them were recognized as medieval sites with big potential, where field works should be run in 2017.

First of them is QASR ED-DEIR (JADIS: 2002001, DEIR, قصر الدير, MEGA Number: 9200), situated south-west of city of Tafilah. In 2016 the ruined building (monastery, maybe later a castle) was only photographed. During the surface survey some pieces of medieval pottery (including the glazed one) were collected as well as remains of robbed graves were recognized (east of the monastery/castle).

Main aim for works at Qasr ed-Deir in 2017 will be inventarisation of the site and refining its chronology (including possible alterations). The planned tasks for this year are: